A TRIBUTE TO BLACK WOMEN IN POLITICS 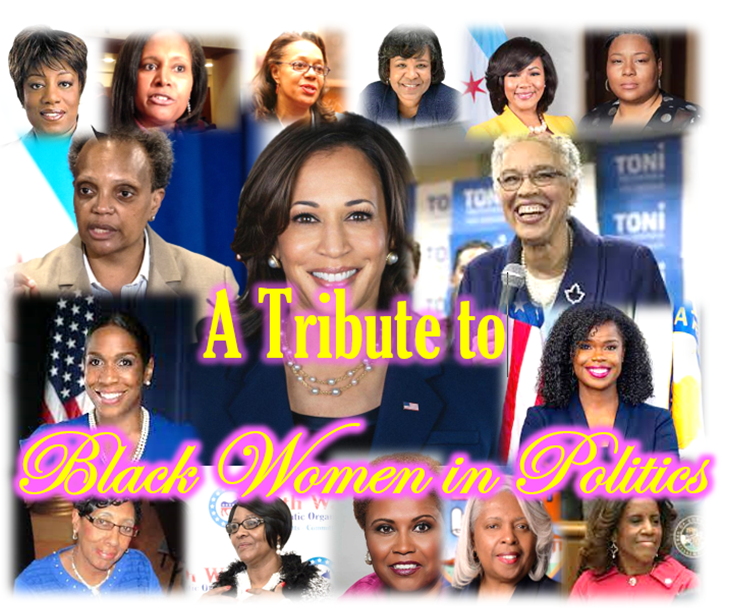 Carol Moseley Braun from Illinois shook up Washington and the political world when she became the first Black woman ever elected to the U.S. Senate in 1993. It was an achievement of note, the first such achievement since Shirley Chisholm became the first Black woman to join the U.S. House of Representatives in 1969 after she was elected to serve New York’s 12th Congressional District, which includes parts of Manhattan, Brooklyn and Queens.

Today, a record number of Black women are serving in Congress. About 47 Black women serve in the U.S. House, including Chicago’s Robin Kelly and sophomore Congresswoman Lauren Underwood, a rising star in national politics. Underwood stunned America in 2018 as a newcomer who helped Democrats take control of the U.S. when she defeated incumbent Randall Mark Hultgren in a predominately Republican 14th Congressional District in Illinois. Underwood was elected to a second term when she held off business magnate Jim Oberweis in a tight race.

Underwood is among a new generation of Black women rising to serve in politics on the federal, state and local levels. Taking on the white political establishment, Black women all over the country are now serving as mayors, state and congressional representatives and some are seeking to unseat incumbent senators and governors.

This weekend as the Black Women’s Expo returns to McCormick Place after being canceled last year during the pandemic, the Crusader salutes Black female politicians in Chicago, Cook County, Illinois and across America for their commitment and courage in breaking barriers as public servants.

Black voter registration activist Stacey Abrams came close to being the nation’s first Black female governor in 2018 when she narrowly lost the gubernatorial race in Georgia against Republican Brian Kemp, who as Secretary of State purged tens of thousands of Black voters from rolls prior to his election.

Abrams is expected to run again against Kemp in 2022 after his Republican legislature passed sweeping voter registration laws that have led to lawsuits and claims of disenfranchising Black and minority voters.

Lightfoot and Preckwinkle emerged as the two top Chicago mayoral candidates in 2019 in a race of 14 contenders, which included Bill Daley, a member of the prominent Daley family that for decades operated a political machine at City Hall that many thought were invincible. They went head-to-head in a runoff where Lightfoot swept all 50 of Chicago’s wards.

There are also nods to retired Cook County Circuit Court Clerk Dorothy Brown and Karen Freeman-Wilson, who served as the first Black female mayor of Gary, Indiana, from 2012 to 2019. Freeman-Wilson currently serves as President and CEO of the Chicago Urban League. Like Braun and Chisholm, Brown and Freeman-Wilson are trailblazers who were before their time when they dared to run in a field dominated by men.

On the Chicago City Council, a record eight Black female aldermen are in office and three are serving their first term as public servants. They include Stephanie Coleman (16th Ward), Jeanette Taylor (20th Ward) and Maria Hadden (49th Ward), whose ward is predominately white. Before they made it to City Hall, some were progressive activists who fought for change in their communities. They are now part of a growing political sisterhood that together has served on the City Council for 162 years.

Black women are also rising to lead cities across the country. In April, Tishaura Jones was sworn in as the first Black female mayor of St. Louis. Two weeks earlier, Kim Janey was appointed Boston’s first Black female mayor following the resignation of Marty Walsh, who is now the U.S. Labor Secretary. Janey was later elected as the first Black, male or female, mayor. There are also Black women mayors in Atlanta; San Francisco; Baton Rouge, Louisiana; New Orleans; Washington, D.C.; and Charlotte, North Carolina. Earlier this year, Atlanta Mayor Keisha Lance Bottoms announced that she would not run for a second term after a tough term in office during the coronavirus pandemic.

State Representative Camille Lilly has served the 78th District for 11 years. In the Illinois Senate, Kimberly Lightford is the most senior Black female official after serving the 4th District for 23 years. State Senator Jacqueline Collins has served 19 years.

Together, these eight Black females have a combined 106 years of service as public servants.

In 1983, she worked on the massive voter registration drive that helped elect Chicago Mayor Harold Washington. In 1984, she served as press liaison for the Rev. Jesse Jackson during the Democratic National Convention. From 1987 to 1999, she volunteered as minister of communications for the Faith Community of St. Sabina.

In 2019, Kimberly Lightford (D-Maywood) was elected as the state Senate majority leader. In March, Congresswoman Robin Kelly made history as the first Black woman elected to serve as chair of the Illinois Democratic Party after longtime leader Mike Madigan stepped down. Kelly defeated Alderman Michelle Harris in a tough election among Illinois Democrats. (In April, the Federal Election Commission, citing its rules, ruled that Harris cannot raise funds for the state candidates.)

More young Black women are also stepping up and running for office. In Chicago, activist Kina Collins is running against longtime incumbent Danny K. Davis for the 7th Congressional District.

Black women make up 11.3 percent of Democrats in the House, and 45.6 percent of Black members of the House. There are no Black females serving in the U.S. Senate after Vice President Harris gave up her seat to run for the White House with Biden.

The next highest number of Black women candidates was 80 in 2018.