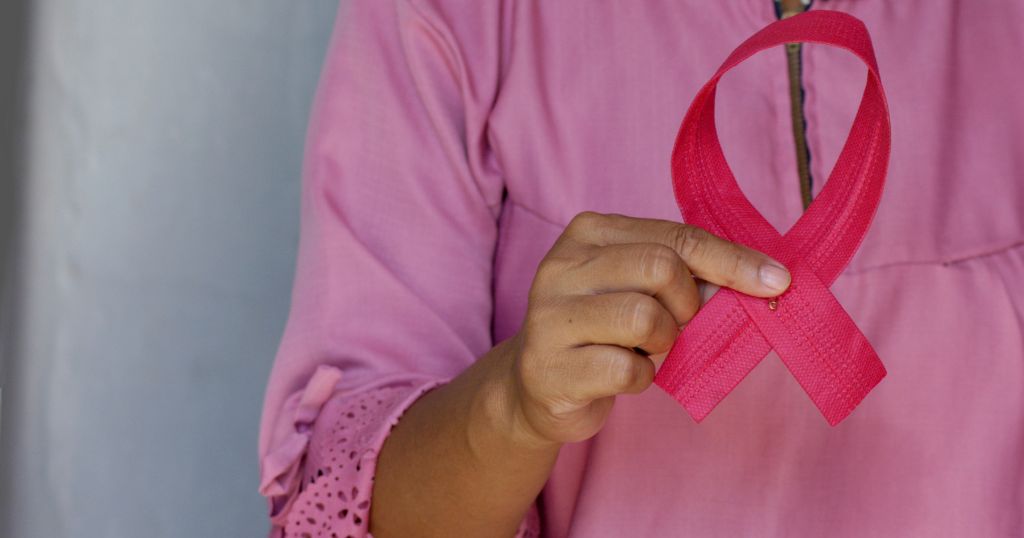 The passing of actress Olivia Newton-John after a long breast cancer battle has many thinking about the disease that afflicts hundreds of thousands in the United States each year.

People like Cathy Keller. When she visited the ribbon cutting for OSF Moeller Cancer Center in 2019, she had no idea she’d be using the services two years later.

Now, the 66-year-old Godfrey resident is telling other breast cancer patients: you can get through it, too.

“You have to roll with the punches,” Keller says.

Heather Chambers is a breast health navigator at Moeller Cancer Center and was with Keller from the beginning. She, too, is a breast cancer survivor.

Chambers says one in eight women will develop breast cancer. Older people are at a higher risk than younger, but younger people typically have more aggressive cancer.

“A huge, huge problem,” as Chambers puts it.

“A lot of the hormones in [a woman’s] body are like a fuel to a cancer cell,” Chambers explains. “When you get an abnormal cell, estrogen in our bodies fuels that cell and produces and produces. And you get a mass. And then you have breast cancer.”

Chambers says those breast cancer tumors can develop over time.

Alejandro Sanz, MD, is a surgeon at OSF HealthCare in Alton who specializes in breast cancer. He says around 233,000 U.S. residents hear the words “You have breast cancer” each year. Around 40,000 people die annually from the disease.

Keller got her diagnosis in April of 2021, followed by a lumpectomy the next month. In June, she wound up under the care of Manpreet Sandhu, MD, and James Piephoff, MD, oncologists at Moeller Cancer Center, for chemotherapy and radiation. Keller says she knew she would get the best care at Moeller.

Keller’s first round of chemotherapy produced the serious allergic reaction known as anaphylactic shock, and at that point she wanted to quit, as the treatment was preventative. But Dr. Sandhu advised against that.

To put it a different way: Dr. Sandhu “went to bat for me,” Keller says with conviction and a slight tear in her eye.

But Keller wasn’t out of the woods yet. Midway through the new type of chemotherapy, she began to suffer neuropathy, or nerve damage that typically results in loss of feeling in your hands and feet.

“I would hold on to little Ziploc bags of ice,” Keller explains. “And they put them on my feet so that the smaller vessels would constrict a little bit so I wouldn’t get all that chemo right back down in there.”

Keller’s lesson in all this: Expect a bumpy road, but know you have to stick with your cancer treatment. And trust that your providers are doing the best for you.

Dr. Sanz says providers will hold up their end of that commitment, too.

“There’s a lot of information involved. Patients can get confused about it. So I take care of that. I try to spend a lot of time with my patients explaining this. Going through the images,” Dr. Sanz says.

Keller says not only was she not going to battle cancer alone, the disease wasn’t going to interrupt her routine. She worked out with a kettlebell weight. And Keller and a friend still walked the hills near Keller’s home twice a week, sharing laughs and stories.

She got support from her biological family and work family. One female student at Alton High School, where Keller works, told Keller she temporarily lost her hair due to a serious infection.

“If she can come to school and have her peers see her with her short hair now, knowing she had long hair earlier in the year, I don’t have to wear my wig anymore,” Keller says. “So I saw her two or three days after I started wearing my regular hair, and I told her, ‘You are my inspiration’.”

Dr. Sanz and Chambers want women to commit these numbers to memory: Start getting a yearly mammogram at age 40. If you have a family history of breast cancer and get an order from your primary care provider, you can start as young as 30.

“Screening is the best tool we have at this moment in order to decrease the mortality of cancer,” Dr. Sanz says.

Chambers adds that unless you’re approaching end of life care, there’s no reason to stop getting the yearly breast checks.

“Women who are thriving and are doing well and have the chance of living the next five years, by all means get their mammogram,” Chambers urges. “Because we can give them that five years by saving them and finding and diagnosing and treating right away.”

Women who are thriving and are doing well and have the chance of living the next five years, by all means get their mammogram. Because we can give them that five years by saving them and finding and diagnosing and treating right away.

Chambers says monthly self-checks of your breasts are equally as important.

“Any woman of any age should do a monthly check. Pick a day out of the month. I want to do it on the first. I’m going to check both breasts,” Chambers suggests. “That way you know your breast. You know how they feel. You know if you have lumpy breasts or not. And so if something changes, something seems abnormal, something feels different, then you get it checked [by a health care provider].”

Dr. Sanz is all-in on both types of breast checks, too. That’s because 80 to 90% of the patients he sees who are later diagnosed with breast cancer don’t present any symptoms like breast pain or skin abnormality. Rather, they are in Dr. Sanz’ office because a mammogram caught something.

Learn more about breast cancer prevention and treatment on the OSF HealthCare website.