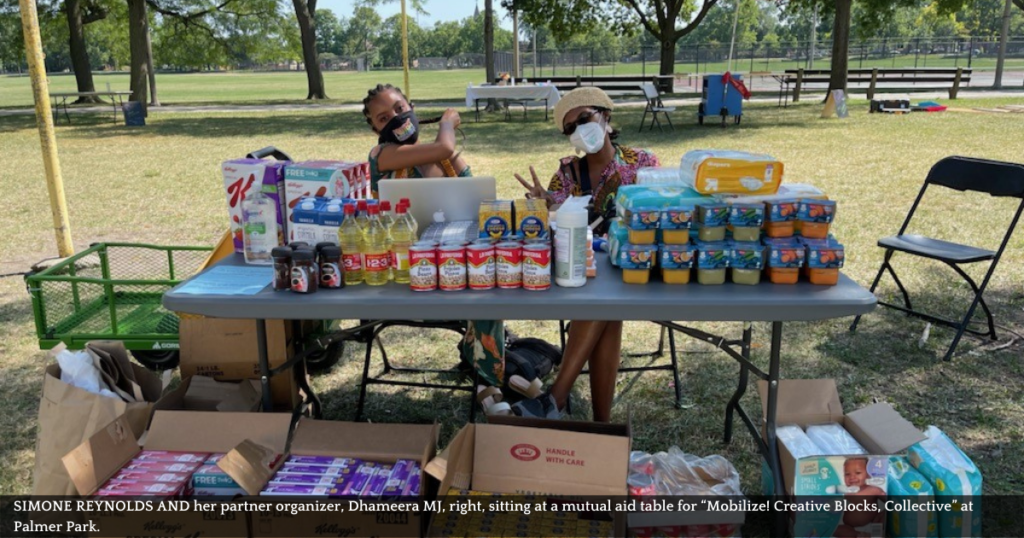 The 15th Annual 3Arts Awards ceremony was held last month, and an Englewood native was one of the 10 recipients who received a $30,000 unrestricted cash grant, which she says is the largest-ever award in her career.

Simone Reynolds spent her formative years in the Englewood neighborhood, and she spoke to the Crusader about her award and “her legacy as a community arts educator, an interdisciplinary artist, and arts worker.”

She has taught numerous workshops focusing on storytelling through visual arts, movement, language, and sound – through music, theater, writing, and media. Reynolds has performed, facilitated, and curated creative learning experiences across Chicago since adolescence. These collaborations include the Community Actors Program, Teen Arts Council, Street Level Youth Media, and CoCre8.

Reynolds, who identifies as queer, works with marginalized communities, with the aim of sparking the “magic” that is in their lives.

When asked how she lures, or persuades, or sparks artistic flames in people, Reynolds said she tells people, “To live in this world as a marginalized person, you have to witness yourself and your life for you. If you let your oppressors tell your story, it will be filled with lies and misery. I come from a people who make miracles with what they have from where they are.

“Luring the magic in the mundane is an ongoing practice of ancestral memory. It consists of singing their [ancestors’] songs, cooking the food they ate, lighting a candle, dancing to house music, and sometimes it’s simply laughing.

“Even though I appear to be so small in the eyes of those who hold more worldly power, deep down I know that my song and my laughter can conjure up possibilities and other worlds that they can’t touch. Knowing that gives me confidence to tell stories that consist of memories that are an expression of my individual and collective identity.”

Reynolds says she developed an interest in art at a young age. “[It started] with me watching my grandfather in the kitchen, singing in the Sunshine Choir, and playing with my younger sister and cousins. I did not know that I was engaging in any type of artistic practice at the time, but my gifts were being nurtured along the way through observing, rehearsing, and embracing play.”

Reynolds has created at-home youth art kits, which included paint and writing materials, right after she finished college in 2020, which she has distributed in the community. She studied Theatre Arts and Women, Gender, and Sexuality Studies at Eastern Illinois University.

“I gathered everything that I earned from my art programs, my art courses, my political education programs, and wisdom from my mentors, peers, and ancestors to create the art kits. It was a heavy time, and still is in many ways, but I wanted to find ways to make our collective load a bit lighter.”

Reynolds measured the success of her art kits a year later. “I was able to collaborate with Nita’s Love Train, the Mobilize Creative Collaborative, and I was able to curate and lead pop-up art workshops in Roseland, Washington Park, McKinley Park, Bronzeville and Little Village. It was beautiful to witness young people and elders create their own portals of joy or listen to what a group of preteens thought about abolition.”

The artist has also reached out to community members and social media to seek donations for art supplies or make donations that would go toward continuing this project. The pandemic had created obstacles, while dealing with community members, which Reynolds worked to overcome. “We must keep each other safe, because the most marginalized are the least protected. It is unjust for disabled and chronically ill folks to not be included and centered in community programming. I make the art kits and workshops accessible by teaching virtually and encouraging masking for in-person workshops that I have led.”

Finally, she is grateful for the award that she can use however she sees fit. “The 3Arts Award will help me to work toward my flourishing as an artist. It was the integrity of my work and commitment to the community that led me to this moment, and that makes everything even more special.

“I have also been doing this particular work for about nine years, so I feel very blessed to be honored by the Chicago arts community. This award has given me seeds of courage to expand my collaborations and arts programming. I have a lot of beautiful ideas and dreams that will create space for multi-marginalized people to be spiritually supported and cared for in their art making,” Reynolds said.

3Arts Executive Director Esther Grimm says, “It has been an honor to be a part of the ever-expanding 3Arts community for the past 20 years. 3Arts is more than a granting organization: it is truly a community of artists supporting each other and coming together to enrich and empower our great city.”

Readers can learn more about Reynolds and the other recipients at 3arts.org/awards/3arts/2022/.